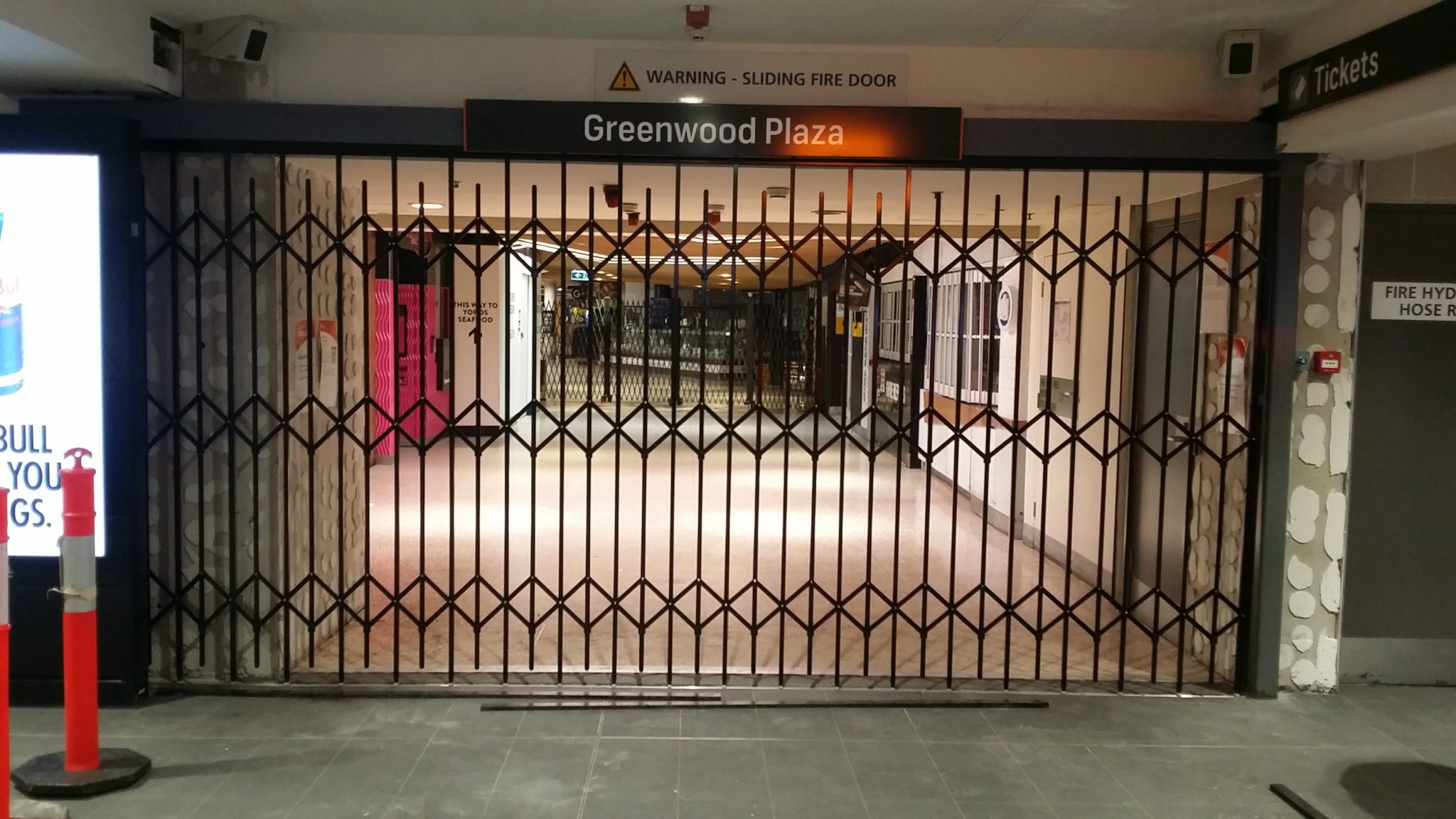 Installed at the interchange entry leading from the railway station through to Greenwood Plaza Shopping Centre, ATDC’s commercial security grille was installed to structural supports provided by Simco, the project managers for this job. The 6000mm wide grille was designed to retract back to a compact storage area of only 15% of the total area secured so as to be almost invisible during trading hours. Having recessed floor track, the commercial security grille is no impediment to the free flow of foot traffic at the railway interchange which is extremely heavy particularly during peak times. A removable floor cover plate is in place during opening hours to create a seamless effect to the finished floor. The works for Simco were all carried out by ATDC late at night so as not to interfere with the running of Sydney’s trains. For other instances of ATDC’s commercial security grilles promoting the free flow of pedestrian foot traffic at public thoroughfares see an article about our security gates being supplied for the Townsville Rail.

A unique magnetic locking arrangement was installed on the commercial security grille on this project in order to comply with the BCA (Building Code of Australia). The magnetic lock is generally wired to the building’s fire indicator panel and is designed to automatically unlock and release in the event of fire. In effect this arrangement creates a keyless egress system for emergency exit. ATDC does have other alternative locking methods for complying with the BCA, the type used depending on the nature and suitability of the particular project at hand. For ATDC’s locking compliance with the BCA refer to our information on our Security Shutters S06.

ATDC’s commercial security grilles are particularly appealing to Australian railway stations due to their heritage design and for this reason they are used quite frequently for securing railway stations across the country. Queensland Rail, WA Rail, Vic Rail, Metrail and Sydney’s Light Rail and NSW State Rail are all frequent customers. The heritage design has its origin in the scissor doors that appeared in many elevators and lifts in years gone by. For further information on the widespread use of ATDC’s commercial security grilles to railway stations see an article on our security door project for Sydney Light Rail.

ATDC’s commercial security grilles are now sold in Sydney, Brisbane, Melbourne, Adelaide, Perth, Canberra and across all regional centres across the country including Newcasle, Geelong, Wollongong and Townsville. These commercial security grilles are also exported widely to Singapore, Hong Kong, Vietnam and throughout South East Asia and the Asia Pacific and Pacific Islands. For further information contact ATDC toll free from anywhere in Australia on 1800 657 435 or view ATDC’s wide range of products available for Commercial Security.